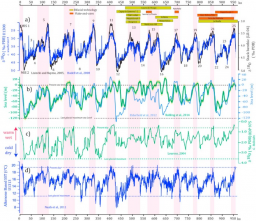 Human occupation in Europe strongly fluctuated over the Quaternary. Archaeological records suggest an intermittent human occupation in Western Europe between 900 and 500 ka, especially in the north of Europe at latitude higher than 45°N. On the opposite, southern Europe, more stable from a palaeoenvironmental point of view, was occupied continuously. This period is followed by a more widespread and dense occupation over the last 450 ka. In parallel, the last 900 ka are characterized by global climatic oscillations and display shifts between glacial/drier and interglacial/wetter periods that modulate the general repartition of fauna and flora. The pacing of these climatic periods is well recorded in numerous palaeoclimatic archives that provide global as well as regional information concerning past climatic and environmental changes. A transition is observed from 1.25 Ma until up to 450 ka (Mid-Pleistocene Revolution) with a change of the dominant periodicity of climate cycles from 41ka to 100 ka in the absence of substantial change in orbital forcing. After 450 ka, the amplitude between glacials and interglacials increases. The change in periodicity since 450 ka corresponds to a change in the density of human occupations as well as the Acheulean technoculture expansion in Europe. There is a general perception that these climatic and environmental oscillations have played a role in human occupation and his morphological evolution. For instance, temperate environments might have favored permanent occupations or occupations over larger territories with long periods dominated by dry meadows and steppes and followed by the expansion of broadleaf deciduous and confireous forests. Testing this hypothesis for the period encompassing 900 to 500 ka is a challenge because of the lack of a common chronological framework between climatic/environmental archives and sites of human occupation, but also because archaeological records are only snapshots of cultural and morphological changes of hominins.