Seasonally resolved chemical ice core records from the Col du Dôme glacier (4250 m elevation, French Alps) and the Mt Elbrus (5115 m elevation, Caucasus, Russia) are useful to reconstruct past aerosol load and composition in the free troposphere over western and central Europe. The extended array of inorganic (Na+, Ca2+, NH4+, Cl-, NO3-, and SO42-) and organic (carboxylates, HCHO, HUmic LIke Substances, dissolved organic carbon, water insoluble organic carbon, and black carbon) compounds and fractions that was investigated permit to reconstruct the key fractions of atmospheric aerosol and their change since pre-industrial times. We find that the atmospheric load of submicron aerosols has been increased by a factor of 3 from 1920-1950 to 1970-1990, mainly as a result of a large increase of sulfate (a factor of 5), ammonium and water-soluble organic carbon (a factor of 3). It is shown that not only growing anthropogenic emissions of SO2 and NH3 have caused the enhancement of atmospheric aerosol load but also an increase of biogenic organic compounds. This unexpected increase of natural biogenic organic emissions (vegetation) after 1950 needs to be considered and further investigated in scenarii dealing with climate forcing by atmospheric aerosol. Finally, calcium changes suggest that coarse aerosols related to background mineral dust and also of Saharan dust events have increased by a factor of around two.

In addition to nitrate ice records that can help to constrain past NOx inventories, I will discuss how useful appears to be the study of species like bromine in such non polar ice cores for our understanding of past and future trends of tropospheric ozone over Europe. 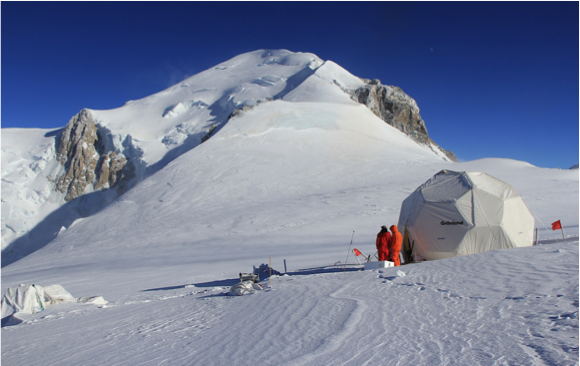