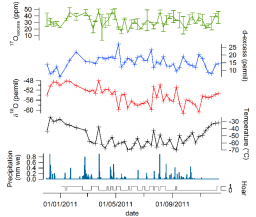 Used alone, the isotopic compositions of O and H in ice give insights into the variations of the local temperature, whereas taken together they can provide information on the climatic conditions at the point of origin of the moisture. Recent analyses of snow from shallow pits indicate that the climatic signal can become erased in very low accumulation regions, due to local processes of snow reworking. The signal-to-noise ratio decreases and the climatic signal can then only be retrieved using stacks of several snow pits. The signal is not completely lost at this stage, otherwise it would be impossible to extract valuable climate information from ice cores. To better understand how the climatic signal is passed from the precipitation to the snow, we present here results from varied snow samples from East Antarctica. We look at the relationship between isotopes and tempera-ture, using results from 3 traverses across Antarctica. We take advantage of these measures to see how 2nd-order parameters (d-excess, 17O-excess) are related to δ18O. d-excess increases in the interior of the continent, due to the distillation process, whereas 17O-excess decreases in remote areas, due to kinetic fractionation at low temperature. In both cases, these changes are associated with the loss of original information regarding the source. Then, we look at the same relationships in precipitation samples collected over 1 year at Dome C and Vostok, as well as in surface snow at Dome C. The slope of the δ18O vs. temperatu-re relationship decreases in these samples compared to those from the traverses, and thus caution is advocated when using spatial slopes for past climate reconstruction. The 2nd-order parameters behave in the same way in the precipitation as in the surface snow from traverses, indicating that similar processes are active and that their interpretation is complicated by local temperature effects in East Antarctica. We then check if the same relationships between δ18O and 2nd-order parameters are found in the snow from four snow pits. While the d-excess remains opposed to δ18O in most snow pits, the 17O-excess is no longer positively correlated to δ18O and even shows anti-correlation to δ18O at Vostok. This may be due to a stratospheric influence at this site and/or to post-deposition processes.