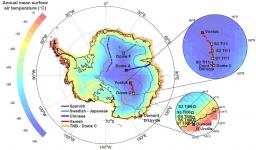 Fig. 1. Recent surface transects performed in East Antarctica and location of the different snow pit sampling sites mentioned in this study, with indication of the mean surface air temperature

Abstract: Polar ice cores are unique climate archives. Indeed, most of them have a continuous stratigraphy and present high temporal resolution of many climate variables in a single archive. While water isotopic records (dD or d18O) in ice cores are often taken as reference for past atmospheric temperature variations, their relationship to temperature is associated with a large uncertainty. Several reasons are invoked to explain the limitation of such an approach; in particular, post-deposition effects are important in East Antarctica because of the low accumulation rate. The strong influence of post-deposition processes highlights the need for surface polar research programs in addition to deep drilling programs.

We present here new results on water isotopes from several recent surface programs, mostly over East Antarctica. Together with previously published data, the new data presented in this study have several implications for the climatic reconstructions based on ice core isotopic data:

1-            The spatial relationship between surface mean temperature and mean snow isotopic composition over the first meter depth can be explained quite straightforwardly using simple isotopic models tuned to d-excess vs d18O evolution in transects on the East Antarctic sector. The observed spatial slopes are significantly higher (~ 0.7-0.8 ‰.°C-1 for d18O vs temperature) than seasonal slopes inferred from precipitation data at Vostok and Dome C (0.35 to 0.46 ‰.°C-1). We explain these differences by changes in condensation versus surface temperature between summer and winter in the central East Antarctic plateau, where the inversion layer vanishes in summer.

water vapor lead to an evolution of d18O in the surface snow even in the absence of any precipitation event. This evolution preserves the positive correlation between d18O of snow and surface temperature but is associated with a much slower d18O vs temperature slope than the slope observed in the seasonal precipitation.

3-            Post-deposition effects clearly limit the archiving of high resolution (seasonal) climatic variability in the polar snow but we suggest that sites with an accumulation rate of the order of 40 kg.m-2.yr-1 may record a seasonal cycle at shallow depth. .