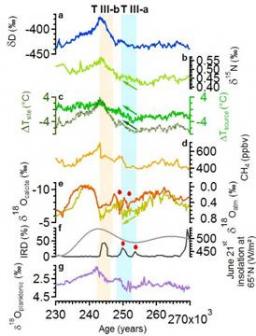 Each glacial – interglacial transition of the Quaternary occurs in a different orbital context leading to various timing for the deglaciation and sequence of high vs low latitudes events. Termination 3, 250 kiloyears before present (ka), is an unusual deglaciation in the context of the last 9 deglaciations recorded in the old EPICA Dome C (EDC) Antarctic ice core: it exhibits a three–phase sequence, two warming phases separated by a small cooling, the last phase suggesting a particularly rapid temperature increase. We present here new high resolution d15N and deuterium excess (d–excess) data from the EDC ice core to provide a detailed temperature change estimate during this termination. Then, we combined the dD and d18O to discuss the relationship between high and low latitude changes through the d-excess. We also provide the high vs low latitude sequence of events over this deglaciation without chronological uncertainty using low latitude ice core proxies. In agreement with previous studies based on speleothem analyses, we show that the first phase of Termination 3 (256 to 249 ka) is associated with small Heinrich like events linked to changes in ITCZ position, monsoon activity and teleconnections with Antarctica. In a context of minimum Northern Hemisphere insolation, this leads to a rather strong Antarctic warming, as observed in the d15N record in contrast to the relatively small dD increase. The second warming phase occurs during the rise of the Northern hemisphere insolation, with a large Heinrich like event leading to the characteristic Antarctic warming observed in the d15N and dD increase as for the more recent terminations.